Wheel in the sky keeps on turning

Fashion, like most things, tends to repeat itself.  Whenever I point something out that I like to my mother, she often responds with a, "I used to have a shirt just like that--I should have saved it."  Yes, yes you should have.  Nevertheless I was unprepared.  Unsuspectingly and innocently online shopping.
When I realized, the time we have all been dreading is now at hand.
So normally I'm all about the Crew.  I was looking at their sweaters today when I found this little gem: 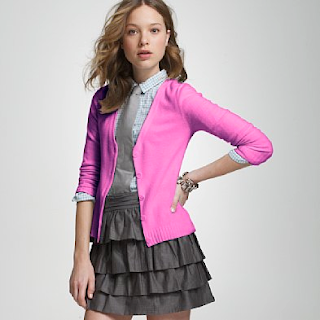 Yes, it is official.  We are returning to the era of tiered minis, and pink and black combos.  This was a devastating realization even though I knew it had to happen eventually.
At least I can be grateful she isn't sporting a new set of shoulders.
Posted by S at 10:31 AM 1 comment:

We're not saying this body wash will make your man smell into a romantic millionaire jet fighter pilot, but we are insinuating it.

All roads lead to the Temple

So, two missionaries walk into a bar... woah wrong story.

So two missionaries tract into this woman and start talking to her, but she tells them it isn't a good time, and asks them to come back next week.  There's a guy in the apartment and the missionaries ask if he'll be there next week too.  He agrees.

Next week, the missionaries are back, the two people are super gung-ho about the gospel, and commit to being baptized.  But the missionaries are all, "yeah, but you need to get married before you're baptized, so come at five and the Bishop will marry you, and at six you'll get baptized."  They agree and everyone goes their separate ways.

It's baptism day.  The couple is late and the missionaries are worried, did they forget, did they bail?  So they go out to the parking lot to see the couple arguing.  Instead of interrupting, they just wait inside to see what happens.  After a few more minutes, the couple comes in, gets married, and gets baptized.

They became the perfect mormon couple, accepting callings, fellowshipping, you name it.  At their year mark, they meet with the Stake President to get interviewed for their temple recommends.  They pass the interview, and afterwards, the husband asks a question:

"Something I don't understand, why did we have to get married?"

Awkward pause "Well, you see it's not entirely appropriate to be living together when you get baptized."

Another awkward pause "But we weren't living together.  I was her landlord and I was just there collecting the rent."

Apparently, all roads lead to the temple.  Thank you ward conference.
Posted by S at 8:38 PM No comments: