Oh the weather outside is frightful 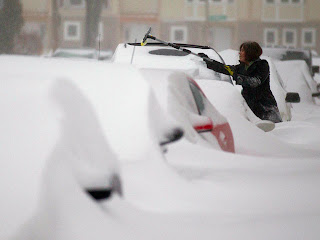 When people ask what it's like to live in Alaska, I typically respond with some variation on "it's really cold and really dark".

Which is completely and totally true.

But that's do-able.  I've lived other places that were really cold and dark, even to the point where I don't really see much daylight.  I've dealt with lake effect snow and howling winds, freezing rain and snow drifts that stay until April.  I've seen snow in June. And clearly it's not bad enough here that I left before my second winter.

Granted, these last few days have been comparatively mild with the warm winds blowing through (apparently they were hurricane-strength... so that's exciting), but before that we basically endured a month straight of "feels like" 5'F and lower.

I haven't been in the sun in weeks.  Or months.  And it's so cold that I can't really breathe.  So I try to find indoor activities.  But it does get kind of boring after a while.  A sort of 'cabin fever', if you will.

Maybe I should have known something was wrong when I got confused last week and had myself totally convinced that it was currently March.  I definitely should have known when the temperature bumped up to 15'F in November and I thought 'it was such a nice day out.'

But I don't think I completely clued in until I looked out the window today, completely unable to tell if the sun was rising, or setting.  Because it's all one motion.  With no daylight hours in-between.