Ode to the Ampersand

So, when I first got engaged, in that haze of post-engagement bliss D tells me to do whatever I want with the reception because he doesn't care and it's my wedding.

Which I thought was... weird.  Because actually it's a celebration of that one time that we BOTH got married... as in... to each other. See?  And.  As in her and him.  Two people.
Regardless.  I have discovered over the years that even though boys say they don't have an opinion--usually they do.  They just don't know it until it's confronted by something they suddenly realize they absolutely hate.  Then there is most assuredly an opinion.

Keeping that bit of experience in mind, I decided to keep my future husband in the loop so no disasters occurred when his new-found opinion met my reality.  And sometimes I think it's sort of funny to send him a picture of something I would never use in a million years.  Like a farm cake.  Or the invitations that reminded me mildly of a pirate ship. Don't worry Travis, I won't steal your birthday cake for my wedding.
Speaking of invitations, I'm picky enough that I decided it would just be easier to design them myself.  I started by looking at designs online and finding out what we liked and didn't like.  From these intel-gathering sessions I realized that my taste is a lot more ... off-kilter than his.  And that he hated monograms.  So with that in mind I set out to design the perfect invitation suite.

Llama love.  See?  Off-kilter.
I decided one day that I had just fallen in love with this concept of an invitation suite in my head.  A suite involving die-cut-esque graphics, letterpress, and mild-to-moderate snarkiness.  The piece de resistance was the announcement itself--designed to feature a giant ampersand.  I spent a solid two hours trying to find the perfect ampersand.  Once I found exactly what I wanted, I realized I didn't like the font that went with it.  So it took me another two hours to find fonts that I liked that still matched my ideal ampersand... and my chiropractor wonders why I have neck problems.

Regardless.  10 designs and several spirited debates later we discovered that, in fact, my future husband dislikes giant ampersands more than he dislikes monograms.

But that's okay.  Even if I can't have one on the invitation, you better believe I'm going to find the most obnoxious one possible to be in all our photos :)

Every photo there ever was.
Posted by S at 6:09 PM No comments:

Put me in rehab and call me addicted!

I would say it's the best thing since sliced bread... but it's not.  It's better than sliced bread.  It's also better than the automobile, science, and the invention of the alphabet.  It is basically better than everything that there ever was.  Except weekends.  I think those still win. 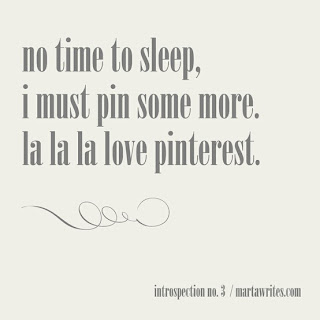 The funny thing is, I've had friends asking me for months if I have a Pinterest account, and I was always like, 'no... I'm never online.  I'll never use one..."  Lie.  That's like how I told everyone I would never get a blog because I don't have things to say.  Seriously?  How was I able to convince myself that I didn't have things to say?  And, really?  "I'm never online"?  When am I not online?!  Regardless.  I have a pinterest account now. And my life will never be the same.

Why is it so great you ask?  Can of worms=opened.

You can socially network without all that pesky socializing involved with other social networking apps.

It's really easy to pin things.  I like this photo.  Pin it.  Done.

I don't have to carry around my flash-drive full of images or make bookmarks anymore.  Don't worry, Pinterest will take care of it for you.  All in one aesthetically-pleasing layout. 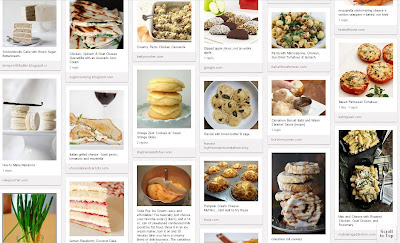 (see: aesthetic... and yummy.  Who can argue with that?!)
When people who don't know you start to follow your boards... it makes you actually feel like you succeeded at life... or something like that.

I have a page full of aesthetically pleasing things to eat.  So when I don't know what to make for dinner, I just let Pinterest decide for me.  Thank you Pinterest!

I think every moment this weekend that I wasn't shoveling snow or going to the doctor... I was on Pinterest.  Pinning like a bandit.

But obsessions don't always last a long time with me.  We'll see where this one ends up in the long-term interest hierarchy.  My guess is somewhere below dogs and  above Tiny Tower.
Posted by S at 7:19 PM 1 comment: