C and I have a running joke, that whenever I do something that we both realize is beyond even my usual idiosyncrasies--I apologize and say I have a sickness (and it's incurable).

Ironically, my anxious and hypochondrial tendencies bounce off each other in a positive feedback loop--resulting in the melodramatic self-diagnosis that I worry about having a disease where one worries about having diseases.

Every year, about this time or so, I am struck with an over-whelming desire to go to the British Isles.  It's gotten to the point that I don't know if the "symptoms" of this peculiar disease caused it, or are the result of it.  But like so many other WAS' (like a WASP, but less affiliated to a specific region or religion) I feel the undeniable tie to Mother England.  I guess it's like SAD--but wanting England instead of the sun.

Now, don't get me wrong--I'm not about to go ex-pat (I'm a bit too American for my own good if you know what I mean), but that doesn't stop the waves of curiosity from crashing over me.

It doesn't help that a number of important holidays in the Isles happen between January and April.  Today, for instance, was St. David's Day.  Patron saint of Wales.  In observance, I wear all black with a bright yellow headband and belt (his flag see--yellow cross on a black field) and... my David's Day pin.  Should I admit I have this?  Or that I made it?  Shockingly, there aren't a ton of companies who carry leek products.  Not near as much commercial appeal as the kissing+alcohol+clovers that apparently means St. Patty's.  Yikes.  Also, who on earth decided that the Irish are infinitely more kissable than everyone else?  Anyway.  Leek+Daffodil=Wales.  Much more refined.  It's about all the country has left after a "long succession of the waves from which history is chiefly composed." 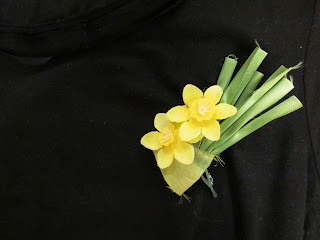 (My David's Day Pin--isn't it cute?)
Speaking of waves of history--in about a week or so I will suddenly decide it's a spectacular idea (and quite an essential one) to re-read one of my favorite books, "1066 and All That... a Memorable History of England, comprising all the parts you can remember, including 103 Good Things, 5 Bad Kings, and 2 Genuine Dates."  Gets me every time.  Williamanmary--getting the Orange to rule England was a very good thing.

Come St. Patrick's Day I'll be sure to wear orange with my green... let it never be said I don't play the diplomat.

Did you know that you can get a flight from Seattle to Heathrow for about the same price as Seattle to Anchorage?  Thats more bad for Anchorage than it is good for Heathrow though... yikes.

However, also at this time of year I celebrate a day that is basically the opposite of Britain.  On Fat Tuesday I celebrate the Polish way and eat Paczkis.  Catholic and Polish.  And fat.  Couldn't be further from Britain (or at least the Sloane Rangers).
Posted by S at 8:51 PM