A serious case of the Wishy-Washies

While I have incredibly decided opinions about some things, with others I just completely fail.  For instance, A and I can never decide what we want to eat.  Ever.  And the situation only gets worse when we try to eat somewhere together.  We have created a bag full of restaurants that we like so when we need food we can just draw an option instead of having to decide on our own.  Which was a nice idea in theory--but in actual practice I think we end up often going through the entire bag before we find something that sounds good.

But the madness neither starts nor ends with food.  I think I've decided that from now on, 2012 should be referred to as 'The Year of the Wishy-Washies'.  Let's review the past 8 months, shall we:

These are my colors.

Actually.  These are my colors.

Tell everyone I know.

Found the most perfect set of dishes ever.

Actually--turns out I'm not getting married.

I should move to Washington.

Do I want those dishes, or do I like other ones more?

I should stay in Alaska.

I should date three boys at the same time.

Or not?  Stupid triangles.

Which is really the question, isn't it?  And if we're talking about dinnerware, we can't just look at 2012, sadly this saga has been going on since I started seriously looking at plate patterns in 1998.  When we were high schoolish ages, my parents would start buying things for us that we would need later on.  Dinnerware, pots and pans, silverware, etc.  So I started looking.  In fact.  I have looked at plate patterns at Corelle so many times, that I could not only tell you what new patterns were available and which had been dis-continued, but I can also refer to most of their patterns by name.

After putting it off for about 8 years, my mom finally gave me an ultimatum where-in I had two weeks to pick a plate pattern.  No more changing my mind.  Up til this point, the issue wasn't changing my mind so much as it was finding something I actually liked.  Now, my taste in material things has stayed rather consistent over the years even as styles change, which simply means that sometimes its easier than others for me to find things that I like.  Unfortunately--the creators of casual dinnerware didn't really catch up to my taste until about 3 years ago.  So I spent a really, really long time looking at floral, vine-y patterns that I < a fan of.  Regardless, I picked a pattern, and I have plates, and they're perfectly serviceable, and really not that bad compared to all the other plate patterns that were available. 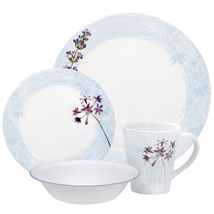 But I still had a hand in the game, so to speak.  Every so often I would do the rounds, look at patterns, see what was available.  And when I was starting to register for things I found it.  The holy grail.  The most quintessential 'Stephanie' pattern that there could ever possibly be. 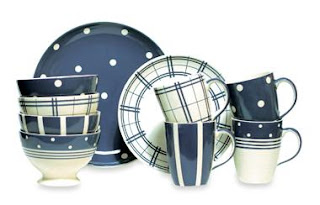 But then Mom reminded me that I had never seen it in person, which laid the seed of doubt.  I started to wonder if they had the right weight and heft, if the picture was true to actual colors, and most of all if it would start to irritate me to have super pattern-y dishes.  I love patterns.  I am in love with color.  But I don't necessarily like for my colors and patterns to compete with my food.  It can only lead to a stomach ache. 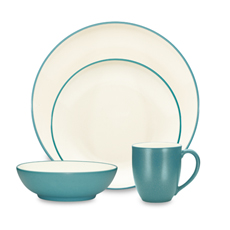 I particularly like how it's neutral where the food goes, and the exterior is matte instead of glossy.

Although it might be nice with some fun pattern-y things mixed in... just so it doesn't get boring.

Which I think actually makes me the wishy-washiest plate pattern picker in the history of dinnerware.