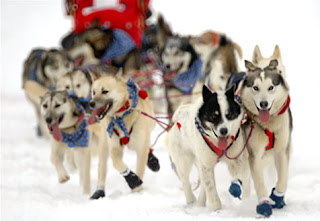 I thought that there couldn't be anything better than shopping fate, but I submit to you that there can! It's call Internship fate. And it is serendipitous.

So I've been stressing about what to do this summer. I planned on staying in Provo and working both in my computer lab and getting a job on grounds. I have to have either an internship or a grounds practicum or I won't get my landscape minor. So I was worrying about that.

Then when Caresse went to Career Days in California she went to an internship fair. She got offered several including one in Alaska. As she came home and we started talking about it, it sounded more and more exciting. So when she was talking to the guy from the company she mentioned her landscape minor roommate who thought this would be an awesome opportunity. He said they had extended all the offers they had, but if I didn't mind working inside they might have an opportunity.

Um, mind? Have I ever mentioned that its like, my ultimate goal to be some CEO's personal assistant? So I gave him a call and we chatted and he told me the position would be as an assistant to the guy in charge and that I would be in charge of scheduling for the company, particularly as it relates to bidding. So I was super excited. And he was happy too because I have a landscape background and I've worked in a computer lab for the last three years. So he extended the offer and I accepted.

I'll be heading there about the first week of May and I'll be back in Provo the end of August. Rent and all utilities for a fully furnished apartment is going to be 150 a month. They are providing a car and I will make way more money than I will here in Provo.