Close Encounters of the Moose-Kind

Okay, I know I disappeared... blah blah blah. I would apologize, but frankly I don't think I will.
So when I told everyone I was going to Alaska this summer the top three comments were about:
1. Being defeated by a moose
2. Driving a tour bus
3. Working on a fishing boat
Now I feel like it's time to address those concerns. First, working on a fishing boat. Okay really? As much as I love seafood and genuinely enjoy fishing can you really imagine me taking a job on a fishing boat unless I really couldn't find anything else anywhere? And driving a tour bus. It's true I do love to drive. But I don't exactly know the area well. And people don't generally hire an out-of-towner to show tourists around. And the Moose. I admit I thought people were exaggerating. I have now been in Alaska for three weeks, and I have seen 5 moosen*. All walking down the street--with the exception of one renegade who was feasting on my neighbors lilacs. In fact, the question I get more than any other at the nursery is about which plants are moose-proof. I can honestly say that it never occured to me that there were enough moose anywhere to constitute that concern. 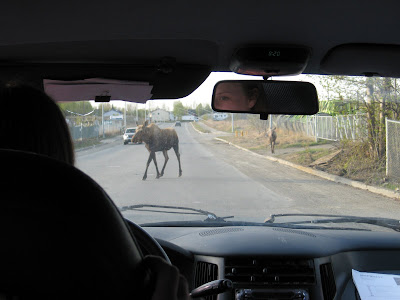 I actually kind of love it here. Solstice isn't for another month but it's never night. Everything takes a while. Sunset, which is always gorgeous by the way, will be two hours long. Then the four hour dusk just goes straight to dawn. It's like there really is no night. I thought I would be able to see all kinds of stars while I was here, but it never gets dark enough! And you definitely can't see the northern lights, which I admit I am a little bit sad about. Maybe by the middle of august it will be dark enough. Trippy.
I have never played more ultimate frisbee in my entire life combined than I have in the last three weeks. It's like the people up here were born with disks in their hands. I like it a lot more than I used to. I think all the practice has helped :) 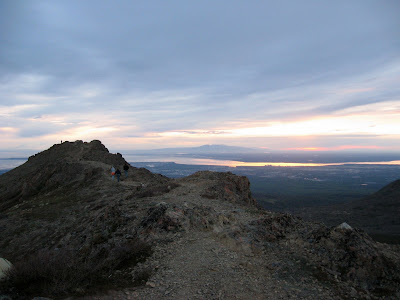 I have now hiked Alaska. It was actually kind of amazing. And the view was so worth it. When I'm home I think I'll post some pictures. I saw a porcupine! I had no idea they were that big! And so pokey. I also found some people to take me shooting which I'm a little bit ridiculously excited for. We have a friend who has promised to take us four-wheeling and fishing. C and I even found some poor guy to play euchre with us on sundays (even if he is an aggie).

Bonfires, barbecues, and Brian Regan* are kind of taking up the rest of my time. So life is pretty good right now.
Posted by S at 5:01 PM