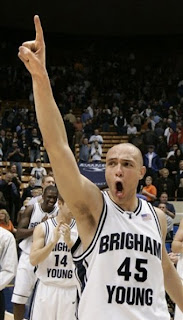 (number 1? Not really, since we lost to SDSU in the conference tournament[SDSU, really?] and have once again bowed out in the first round of the NCAA tournament)

This whole madness thing has actually added a dimension of joy to my March. In fact, March used to be my least favorite month of the year. It was just that ridiculously long stretch between midwinter break in February and spring break in mid April (Oh, good old high school, back when such wonders like spring break existed). The combination of the two turned March into this 7 week drought, free of vacations. I remember once upon a time I told a friend that I wasn't a big fan of March and she got all offended and wouldn't talk to me because that's when her birthday was. She wasn't grasping the whole "this actually doesn't have anything to do with you and was really supposed to be mildly entertaining" concept.

I don't mind March anymore now that I fill out brackets. Not only is it fun to play a game that I (frankly) am really bad at, but then you get to have something to talk about with complete strangers. I really like it when that happens. The cherry on top of this whole situation is that we make everyone at work fill one out. Somehow the first year we did this I got put in charge of keeping track of everyone, and the job sort of stuck. Now we get to go around badgering people into filling out brackets, even though just about everyone has no idea whats going on. I love the droves of people who put BYU winning it. Not that I don't love my team--I always have to give them the benefit of winning one game even when I know they will lose--but I am completely aware of the fact that despite multiple appearances, BYU hasn't won a single game in the NCAA tournament since 1993. Which despite my state of mind that still thinks it's 1999, '93 was sort of a while ago. For whatever reason I have this totally random bracket connection to Duke. I can't help but put them at least making the final four, if not farther, every year. And they always disappoint. But I just can't seem to say no!

There used to be this one guy who worked here that did a statistical analysis of the last decades' tournaments to find where the upsets happen. In theory, there should be 8 or 9 in round 1, abour 4 in the next round, and then 1 in each of the next rounds. This has been a tried and true method for many of my co workers. Others rely on the mascot theory. Another glorious TEC lab tradition is that of me making Jake's bracket for him. Every year. And he always wins. Every year. You'd think I would learn, eh? My favorite part of this whole little game is that it gives me something to do at work. Frankly, I get bored at work a lot. So for these wonderful three weeks, I can come into work, check to see whats happened since the last time I checked, and update everyone's brackets for them. I think its fun, even if no one else does.

It was kind of funny. This year when I was trying print out brackets I just wasn't paying attention and I kept accidentily printing out the wrong year's brackets. And not just printing them, but passing them out to everyone at work. Three times. I should have felt stupid, but I got over feeling stupid about things like that years ago--now they're just entertaining!